Fountain House Gallery and Studio provides an environment for artists living and working with mental illness to pursue their creative visions and to challenge the stigma that surrounds mental illness.

Founded by Fountain House in 2000 as a not-for-profit exhibition space for its member-artists, the Gallery sells original artworks and collaborates with a wide network of artists, curators, and cultural institutions. Embracing artists who are emerging or established, trained or self-taught, Fountain House Gallery cultivates artistic growth and makes a vital contribution to the New York arts community.

Gallery artists have full-time access to the space where they can work to advance their careers while collaborating with others in a supportive setting. The Studio is open to the larger Fountain House community during designated drop-in hours.

Fountain House Gallery has attracted distinguished guest curators such as Agnes Gund, President Emerita of The Museum of Modern Art (MoMA), who commended the Gallery as “a place where you can view fine works of art made by a group of excellent artists.”
Fountain House Gallery functions as a cooperative business run by and for its artists. Operations are supported by a small professional staff led by Ariel Willmott, Director, with the assistance of numerous community volunteers.

Works by Fountain House Gallery artists are included in the collections of Citi, Eli Lilly and Company, and The Estée Lauder Companies Inc.

Fountain House Gallery has participated in exhibitions in public spaces, including: the Kennedy Center in Washington, D.C.; the Citi DeFord Gallery and lobby in Long Island City; and the World Financial Center Courtyard Gallery in Manhattan. Works by Gallery artists are presented at the annual Outsider Art Fair.
In this section, City Voices’ field reporter and artist in her own right, Jenny Chan, interviewed five member-artists of Fountain House Gallery with the following questions:
1) How long have you been an artist?
2) What is your medium?
3) What are your favorite subjects?
4) Who is your favorite artist and why?
5) Where was your first exhibit? 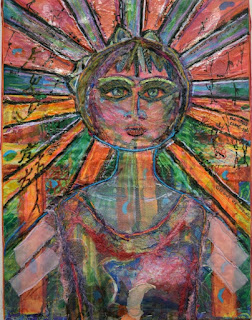 New York City-born Alyson is a fiber artist who taught herself to sew and quilt at a young age. She received a BA in Japanese Folklore and Mythology from Harvard University. After the effects of surgery for a benign brain tumor ended her 22-year teaching career, Alyson experienced a burst of creativity that brought her artistic ability to the fore. As a self-taught artist, she creates instinctively, incorporating in her work themes of decay and loss, transience, childhood and dreams. Alyson employs various techniques in her pieces and utilizes all types of fiber and found objects to express the beauty and order she perceives in a chaotic world. A number of her fiber works were acquired by collectors at a 2014 exhibition at the Eileen Fisher store at Columbus Circle. Alyson’s 2016 solo exhibition at the prestigious venue White Columns was a great success with critics and collectors. Her work was awarded First Prize in the mixed media category of the 2016 Art Ability show in Bryn Mawr, PA.

1. It's hard to say how long I've been an artist. I have always made things, but after I had brain surgery in 2007, I started making things that had no real purpose. I wasn't sure it was art until I started coming to Fountain House Gallery in 2013.

2. I wouldn't say I have a specific medium. I will use anything and everything, but I love making things out of fabric.

3. I enjoy making nature scenes and also cityscapes. I think most of my work is abstract.

4. I have always loved Paul Klee and Joan Miro. I also like Kandinsky and Mondrian. Recently, I discovered an artist named Hundertwasser. He's my new favorite. What I love about all of them is their use of lines.

5. My first official exhibit was in Fountain House's "Mad About Art" show in 2013. 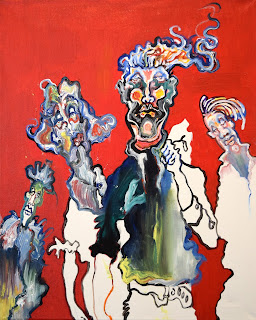 A signature of Anthony’s work is bold color, and oil is the primary medium he employs in creating his powerful and distinctive portraits. He studied at the Hussian School of Art in Philadelphia and also studied illustration at Fashion Institute of Technology (FIT). He has had one-man shows at Jadite Gallery, Cuchifritos of the Lower East Side, and Chashama, and he has exhibited at the Deshong Museum of Art in Chester, PA, the Art Culture Center in Brooklyn, and in NYU's 2008 Small Works show. He was a featured artist in a private exhibition at the LandAir Gallery in New York City, and Fountain Gallery presented his work in the two-person show Urban Faces and in the three-person show Body Language. Anthony’s work was included in an exhibition at the Education and Research Center of the Museum of Modern Art (MoMA).

4. Jean Michel Basquiat because he was an artistic rebel.

5. My first exhibit was at Day O Restaurant now defunct in The Village (New York City), 1994. 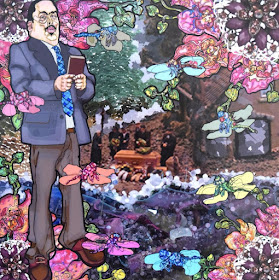 Bryan works primarily in drawing and painting. As a youngster growing up in Yonkers, Bryan’s early artistic influences were cartoons and comics. He was a “doodler” and kept a sketchbook. While in grade school, he learned computer programming and began making images with the school’s Apple IIe system. Bryan studied figure drawing at the Art Students League, and he was awarded a BFA in Fine Art and an MFA in Computer Art from the School of Visual Arts.

1) My earliest memory of Art-making goes back to first grade. I was in school and I took the chalk and went to the board and started to draw circles, one on top of the other, circle after circle, trying to make the perfect shape.

2) Gouache, which is an opaque watercolor, and [plain] watercolor. They are very unforgiving mediums. You can't make any mistakes. So you have to focus on what you're doing at the moment. If you do mess up, there are few things you can do to correct the mistake. If you're painting with Gouache you can paint over the issue, but if you paint too many layers on top of each other, the paint will crack and peel. Watercolor is even more unforgiving. If you paint with watercolor, you have to think about the next two to three marks you will make because of layering, color combinations, and wetness.

3) The self portrait. Even though I make more income from a still-life, abstraction, or landscape, I like to express myself with a self portrait because I can make an image and not worry about how I look or whether the model will feel comfortable in the pose, or having enough money to hire a model in the first place.

4) I like all art. I have no favorites, heroes, or nemeses. The more I see, the more inspired I become. Visual art is about the visual and if you can grab the viewer in the first 15 seconds, I believe you have made a successful image.

5) My first showing was at the White Plains Women's Club. I entered four drawings and won third place. 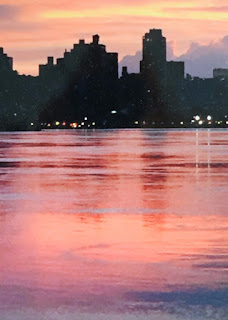 Born in Lares, Puerto Rico and raised in New York, Jasmine is a multimedia artist who works in watercolor marker and colored pencil. She is a graduate of Fashion Institute of Technology (FIT) in Fashion Design with a specialization in Sportswear, and she also studied at The New School. Jasmine has worked in the garment industry and was honored with the Juan Eugene Ramos Hispanic Designers Award. She is inspired by the great master of fashion illustration Antonio Lopez. Jasmine has collaborated with fellow Fountain House Gallery artist Deborah Standard in creating wearable art.

3. Fashion-oriented or fashion-related, color and form.

4. Picasso because of his cubism (an early 20th-century style and movement in art, especially painting, in which perspective with a single viewpoint was abandoned and use was made of simple geometric shapes, interlocking planes, and, later, collage). I was amazed by his small works.

5. My first exhibit was at Fountain House Gallery in 2008. I sold a piece called “Grey Matters” (like your brain matters). 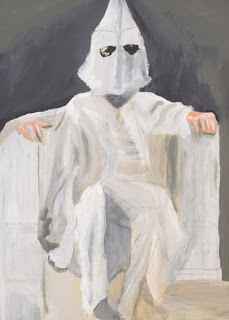 A self-taught artist, Susan is also an actor, writer and filmmaker. She performs under the stage name Shyla Idris. Her work is autobiographical, commenting on her experience in the mental health system as well as touching upon racial issues and other areas of social injustice. Susan works in acrylic and mixed media from small to large unframed work, including body prints, collage, and painting on found objects. Her work was recently shown in the City Arts exhibit in Nottingham, marking the first time that pieces by an artist working outside the UK were selected for inclusion.

1. I first started painting at the age of three.

2. I work in mixed media, primarily acrylic. My medium includes, but is not limited to: found objects, body painting, film, fabric and I also like to incorporate writing and objects such as my psychiatric meds & other pills in my art.

3. I like to do social, political work. Also iconic figures, personalities and animals.

4. I do not have a favorite artist. Growing up, I wanted to be an actor. My favorite artists were actors, and I still consider acting to be a high art form. However, If I were to choose a visual artist that moves me, it would be Yoko Ono. I love Ono's work because she is a conceptual artist with a brilliant mind.

5. My first art show was at 'The Living Museum Open House' in Queens Village, New York in January of 1998. The Living Museum was an art program I used to attend, but was thrown out after I changed my mind about being the main subject of an HBO documentary.